A new infrastructure offering from T-Systems has been designed for providers of corporate cloud services. The two data centres of the Telekom subsidiary in Magdeburg und Biere offer increased security and the highest level of availability.

The two data centres in Magdeburg and Biere work as “twins”: data is always saved concurrently so if one site is unavailable, access to data is maintained with the other.

Time-laps of the data centre construction 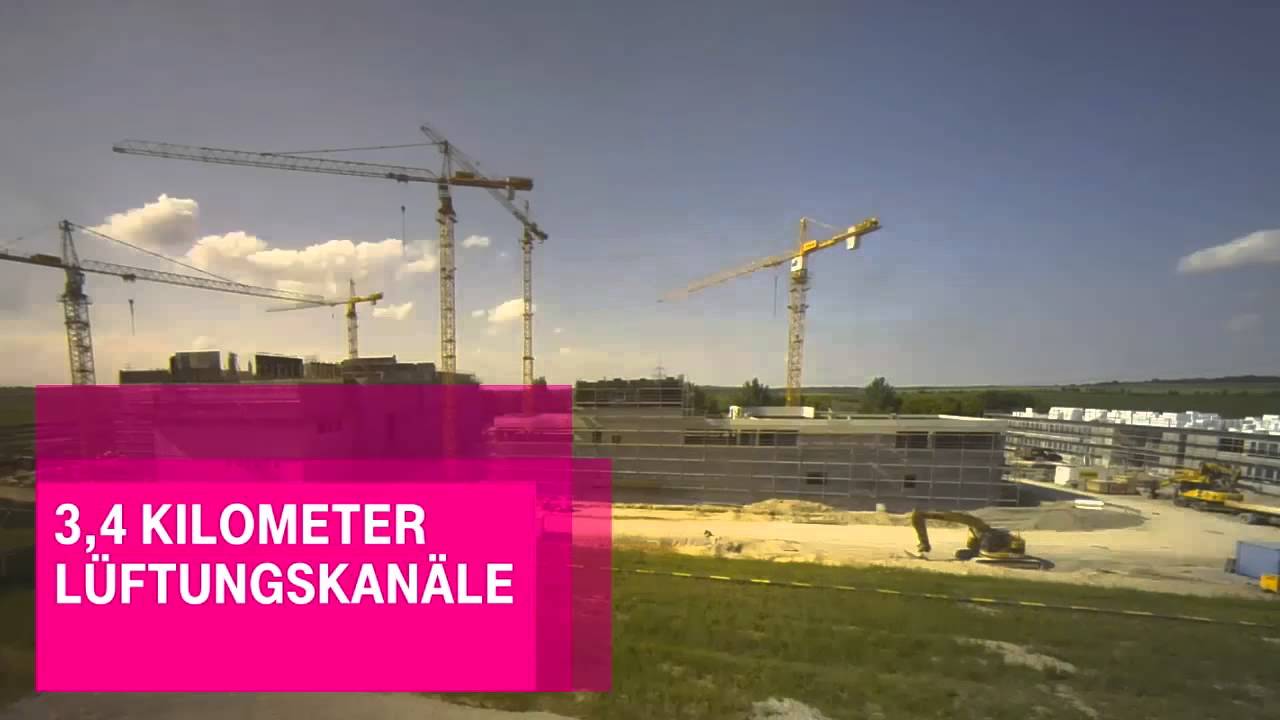 Run on the "House of Clouds" thanks to its "unbeatable combination"

The data centre in Biere is one of the most secure and modern cloud data centres in the world. More than 50 well-respected hardware and software providers are already tenants in this “House of Clouds”, as experts reverently call it – including famous names such as SAP and Cisco. Demand for cloud services is extremely high.

Ferri Abolhassan, Director of T-Systems’ IT Division since the end of September and responsible for Telekom Security, knows why, “Companies find what they are looking for in Biere: the highest level of security and reliability coupled with strict Germany data protection – an unbeatable combination.”

As the demand is so strong, Biere is being further developed at top speed. Capacity utilisation is already running at around 70 percent. In early summer 2018, it is planned to add a further three data centre modules to the existing two.

This will see an increase in processing and storage capacity of around 150 percent. In Biere, there are already 20,000 servers in 1,400 special racks. With the new server rooms, the data centre in Biere can then run IT equipment which will need around 18 Megawatt (18 million Watts). As a comparison, an average notebook needs around 30 Watts.

The two data centres are 18 kilometres apart and the exchange of data between them runs via their own network, separate from the internet. Redundant fibre optic cabling (IP-VPN-Tunnel) means the data remains in Germany. To ensure business continuity and restoration of data, even in disaster situations, data is constantly replicated between the two geographically separate data centres.

The buildings themselves are protected by the most modern security systems; physical access is strictly controlled. When needed, high-capacity emergency generators will ensure the electricity supply continues uninterrupted. Twelve marine diesel motors guarantee service for at least two days in an emergency should the surrounding substations, which are themselves connected twice to a 110 Kilovolt power line, fail. Furthermore, T-Systems protect the data centres to the highest technical level from hacker and cyberattacks. T-Systems can guarantee a permanent data availability of up to 99.999 percent, representing Tier 3+ security level.

Infographic: The Fort Knox of data in numbers

The only difference? Biere stores data, not currency reserves. The data centre is one of the most modern and, once the last building stage is complete, will be the largest in Germany. The complex will cover an IT space of 9,000 square metres and contain around 30,000 servers.

Two metre high fences, barbed wire, a four metre high earth bank against possible attack with an articulated vehicle, 300 CCTV cameras, infrared searchlights, a security centre behind bullet-proof glass, windowless above-ground bunker. Whatever is being stored here is absolutely secure. “You can trust me when I say no one gets in who doesn’t belong here,” says T-Systems’ Johannes Krafczyk.

One of the most important security measures is the dedicated high-speed data connection to the other data centre in Magdeburg, which acts as a twin (Twin core technology). This means that all data in Biere is replicated in real time in Magdeburg. The data centre there has been configured so it mirrors the facility in Biere. This also allows the cloud in Biere to be operated with almost no staff, as both centres are managed from Magdeburg. The data centre in Biere’s firewall is strengthened by intrusion detection and intrusion prevention systems which localise suspicious data streams.

The data centre in Biere is also in the forefront of energy efficiency: it uses 1.3 PUE (Power Usage Equivalent) – about 30 percent less energy than a comparable data centre– thereby greatly reducing CO2 emissions. The cooling systems alone reduce energy use to a level which has earned the Telekom subsidiary the highest international LEED (Leadership in Energy and Environmental Design) certification. Only ten data centres worldwide have been given this prestigious Gold Award so far.

“This unique Ecosystem from a leading provider allows us to offer customers maximum flexibility and freedom of choice of their services. This is backed up by the consistent implementation of our Zero Outage quality programme, tailor made for their quickly growing needs,” Abolhassan explains. For customers, this means no Oops, an error occurred! Code: 20180829092331cebc4364. “Thanks to Biere and its performance, all customers, whether new or those wishing to extend their contracts, are offered un-outsourcer options. After a hypercare period, they can cancel their Dynamic Services for SAP and SAP HANA with no reason given,” continues Abolhassan.

Customers benefit from the new services in Biere and Magdeburg in several ways: various cloud platforms, such as Open Telekom Cloud, are co-located under one roof, pathways are short, and networks are fast. This makes the location particularly attractive for managed IT services, which will be hosted in Biere in the future. Companies can now provision and run all their IT needs, including processing, storage and securing mobile devices.

Current articles about Benefits of the Open Telekom Cloud

10/31/2022Best-in-class public cloud in the Netherlands10/14/2022On the pulse of time: Digitalization in the healthcare sector09/08/2022Analyze big data quickly and highly securely